Report on the 1st International Conference of NGOs

By ICH NGO ForumNovember 28, 2015No Comments 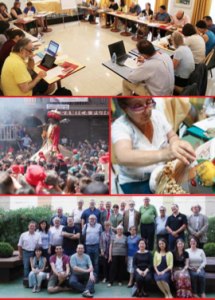 The First International Conference of NGOs Accredited by the Convention for the Safeguarding of Intangible Cultural Heritage took place from June 6-13, 2015 in Santa Susanna (Catalonia, Spain) called by the Ens de l’Associacionisme Cultural Català and the ICH NGO Forum. The decision to organise this meeting, proposed by the Ens, was made by the ICH NGO Forum in November 2014, during the Intergovernmental Committee meeting held in Paris.

The overall objective of the meeting was to further develop the definition of the Forum’s role and structure, so that it could make a more effective contribution to implementing the Convention. It was a question of finding a different framework from the meetings prior to the Intergovernmental Committee meeting, where enough time could be devoted to discussions about various issues related to the Forum’s activities.

At the same time though, a meeting of this nature is obviously a chance to spread the word about the Convention among the bodies and associations of the territory where it is held.

You can download the full report here: Report NGOs conference.