By ICH NGO ForumDecember 22, 2015No Comments 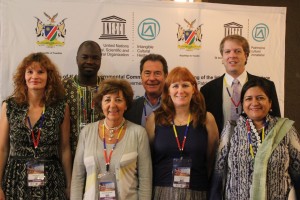 An important step forward has been taken in the organizational structure of the ICH NGO Forum. The proposal was developed in 2015 to work with a Steering Committee starting from 10COM (November 2015). The aim of the Steering Committee is to have a group of people from active accredited ICH NGOs willing to take the Forum forward in the coming years in the roles and functions as decided by the ICH NGOs taking part in the Forum’s activities and network worldwide.

The ROLE of the steering committee is to represent the Forum and coordinate, encourage, facilitate and support the 9 roles and functions.
Another role for this 1st temporary Steering Committee (2 years) consists in preparing representative and legitimate (s)election procedures by 2017 with regard to the future coordination of the Forum based on a 4 years cycle.

The first Steering Committee is adopted for a period of 2 years, and composed along to the following criteria:
– being member of an accredited ICH NGO
– as a person being appointed to represent this NGO (by this organization)
– having availability, skills and experience within the 2003 Convention
– having been actively involved in the past in the ICH NGO Forum’s activities
– being able to engage to be present twice a year to attend the meetings
– furthermore the Forum strives for a diversity in geography, gender as well as within the ICH themes/expertise

The 1st ICH NGO FORUM Steering Committee is composed of: