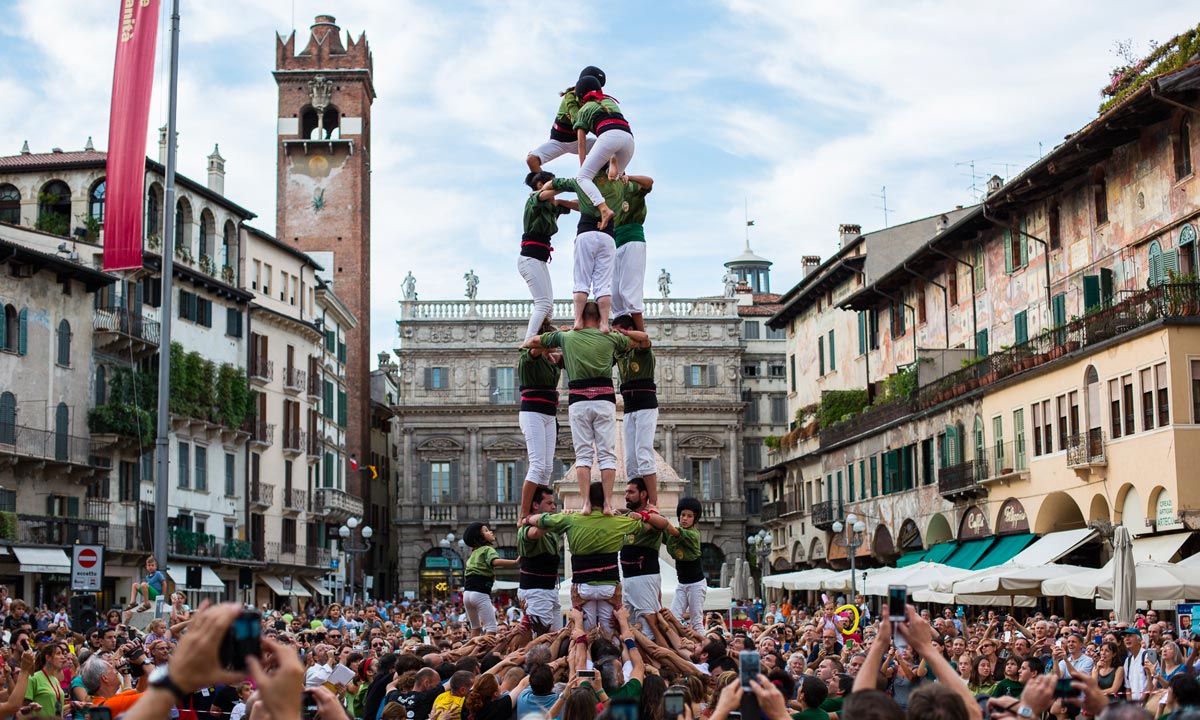 Experience on the ground

Tocatì is a community-led, multi-actor movement established for the safeguarding of Traditional Games and Sports (TGS) as social practices and expression of ICH. TGS are living practices that exist in an informal environment, as part of daily life, and also in ritual and festive contexts.

Tocatì, a shared program for the safeguarding of TGS is a multinational application for selection in the UNESCO Register of Good Safeguarding Practices, under evaluation for possible inscription in 2022. The Tocatì network, coordinated by Associazione Giochi Antichi (AGA) includes ludic communities, institutions, researchers, policymakers, and a wide group of stakeholders. The safeguarding process is supported by the European Traditional Sports & Games Association (ETSGA) the International Traditional Sports & Games Association (ITSGA), and the Italian Society for Museum and Heritage Anthropology (SIMBDEA), accredited ICH NGOs, next to many other stakeholders.

This dynamic, bottom-up initiative founded in 2002 is now a permanent program consisting of a network of communities and groups from all over the world, sometimes even encompassing informal groups. The network, often referred to as “a community of communities”, was born out of an International Festival of Games in the Street which aimed to reverse the trend of over-tourism in Verona, a World Heritage Site. Opportunities for the transmission of a broad set of cultural practices, such as handicrafts, food traditions, and knowledge of nature associated with TGS exist in the Tocatì network.

The Tocatì Festival organized by the Associazione Giochi Antichi (AGA) in collaboration with the Verona Municipality and with the contribution of the Veneto Region, is a significant component of the Tocatì program and is celebrated every September in the historical center of Verona. During the three days of the festival, the city is closed to traffic and is instead converted into a play zone – this initiative endeavors to raise public awareness of TGS and transform the related cultural spaces into places of integration and dialogue between different cultures.

The Tocatì program hopes to

The point of departure

On the one hand, in towns such as Verona and Venice, the problems posed by mass tourism, such as the non-recognition of cultural rights of the local people are pervasive.
However, on the other hand, in mountainous, rural regions and inner areas, distrust and a lack of human resources caused by depopulation and the migration of young people to cities is a big challenge to be met. Sustainable tourism represents a development tool for these areas.

Overcoming the challenges: the pandemic experience

The onslaught of the Covid-19 pandemic helped mitigate some of the threats posed by decontextualization, over-tourism, and touristification that would otherwise typically engender a sense of “confiscation of cultural spaces” by tourists and tourist operators among local practitioners. For instance, playing in the streets of Verona during the Tocatì festival can be decontextualizing as the communities of practitioners usually are not in Verona, but in their own local public spaces. Over time, this challenge was detected thanks to a strong dialogue with local contexts in the choice of play spaces in Verona during the festival, and a creative spirit. In the numerous online initiatives that were set up during the pandemic period, traditional games and sports being practiced in their environmental contexts were demonstrated. Additionally, the use of digital tools, such as big screens, also allowed people in Verona to witness in one place several traditional games and sports being played in different parts of the city for the festival. This may have made it easier to envision the bigger picture of traditional games and sports, and ultimately fostered a sense of cohesion and belonging among them.

Understandably, the pandemic impacted all regular activities of TGS as these are social practices often related to festive and public events, nevertheless, interesting resilience experiences emerged from the Italian communities of the network. In this respect, Tocatì also participated in “Living heritage during the pandemic,” a UNESCO initiative.

The Tocatì festival is a good example of an experience involving tourists in local life while ensuring that ownership of the ICH element is in the hands of the heritage bearers. Touristic projects run by the community of practitioners have led to sustainable regional development in harmony with the local culture, with the benefits being shared among the community members. Additionally, tourists visiting during festive periods and TGS events often boost the local economy, and sustain livelihoods, ultimately contributing to the local development of rural areas.

Several communities of the Tocatì network, especially those residing in mountainous and remote regions facing the challenge of depopulation recognize the advantages of participating in the events organized by the network. While substantial quantitative data remain to be collected, the qualitative data obtained so far suggests that locals attribute economic development and the promotion of their territory to ICH-based actions. Young people, local associations, and handcraft shops, in particular, indicate to have benefitted. It is hoped that this will also propel the youth to make different choices for the future.

A related example of ICH-oriented specific European programs devoted to the topic of tourism, supporting communities in their safeguarding efforts, is the ongoing Erasmus+ project, Traditional Wrestling for Cultural Tourism (TRAWECU).

While the 2003 ICH Convention and the network-building offered by the ICH NGO Forum are powerful tools to mitigate some of the aforementioned threats, local, national, and institutional support and policies are a critical need.

What will be helpful?

Tocatì is hoping to learn from other concrete cases of bottom-up safeguarding initiatives. It could help to understand the diversity of practical experiences related to the promotion of ICH in connection with tourism.