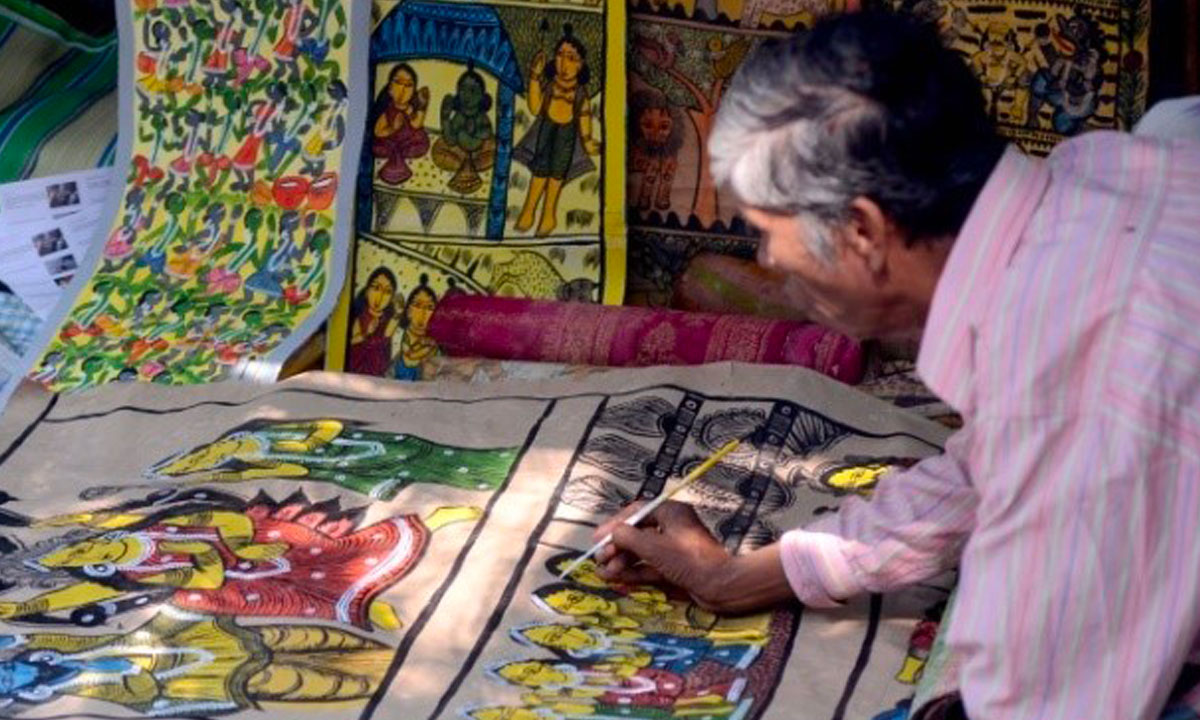 Experience on the ground

© copyright of the cover image “A Patua of Pingla drawing Patachitra (2020)” belongs to Ananya Bhattacharya.
Use without the author’s permission is forbidden.

Patachitra is a type of scroll painting practiced by a unique community of folk artists who are painters, lyricists, and singers belonging to the Naya village of West Bengal, India. The tradition itself can be traced back to the 13th century; the scroll painting is called Patachitra and the songs associated with the stories being painted on the scrolls are called “Poter Gaan.” Back in the day, the traditional bearers of this visual-oral art form earned a living from alms they received in exchange for their door-to-door performances which saw a gradual decline due to the lack of patrons. However, over the years, the artists have evolved and diversified their offerings, and established an artists’ collective called “Chitrataru”. Today, the Patuas of Naya comprise a distinguished artist community of over 250 practitioners hailing from 80+ families who have won many accolades nationally and internationally.

Contact Base, an NGO based in Kolkata advanced its ‘Art for Life’ model of developing villages of traditional artists as cultural destinations, linking traditional practitioners directly to the market. The revitalization of the endangered Patachitra tradition was made possible by the support extended by the Eastern Zonal Cultural Center (EZCC) (2005-2008) and the European Union (2009-2011). In 2013, the village came under the purview of the Rural Craft Hub (RCH) project (2013-2016), a joint initiative of the Department of MSME&T, the Government of West Bengal, and UNESCO.

The point of departure

The artists had been suffering from abject poverty as a result of menial labor jobs, with only around 20 practitioners at the start of the 21st century. Contact Base started its safeguarding initiative in 2005 by exploring how this tradition could be turned into a sustainable livelihood for the artisans. The sustainability of the oral tradition comprising songs and the knowledge of making and using natural colors emerged as the key challenges.

The artists were taught to use different types of colors used to paint on wood, metal, leather, and silk. This led to the creation of diversified products depicting stories associated with Patachitra, which in turn augmented the community’s income opportunities. To create an awareness of the families of storytellers and create opportunities for the community to perform and showcase their tradition, a three-day festival called POT Maya (the charm of the scrolls) was initiated in 2010 as an annual weekend festival to celebrate the success of the local artists in reviving the heritage art form, along with the development of a living museum. The festival created an awareness and appreciation of the art form among the neighboring communities and attracted local as well as global audiences – it also soon came to be regularly visited by school and college students, and locals started to buy the painted products. The festival was held regularly till 2019 and during breaks between the lockdowns brought on by the Covid-19 pandemic, the tourism wing of the national government promoted the village as an “Incredible India Weekend Getaway” destination.

The village is a case study of sustainable ICH-based cultural tourism development and resilience-building among community bearers and is visited by craft enthusiasts, painters, photographers and bloggers, writers, and other tourists throughout the year. The safeguarding efforts have been documented by UNWTO and Patachitra has also acquired a Geographical Indication (GI) tag which is an asset for tourism promotion.

From a meager average monthly income of INR 500 (US$ 7), the Patuas experienced a steady rise in income to an average of INR 7000 to 10000 (or US$ 90 – to $ 130) per month in 2009. In 2019, the average monthly family income of these 70 families amounted to INR 16,000 (US$ 200). In addition to the annual village festival that experiences an average footfall of 5000 tourists per day, more than 3000 tourists visit Naya throughout the year which generates an annual income of INR 5 million (US$ 64000). The success of this local cultural tourism development model was underscored at the global level when UNWTO/ UNESCO World Conferences on Tourism and Culture led to the development of three Declarations focusing on building new partnerships (2015), fostering sustainable development through tourism (2017), and generating benefits for all (2018).

Pingla is a daytime destination with limited tourism infrastructure – while some homestays have been developed in recent times, the village is still not equipped to host even 25 tourists for overnight stays. Moreover, even though Pingla has grown into a vibrant cultural tourism destination in the past decade, demarcating the private from the public space becomes a major challenge as a result of its small area. Thus, to develop responsible local tourism, initiatives need to ensure that private space is not infringed upon in the process.

So far, tourist destinations have majorly centered on built and natural heritage; in contrast, this case demonstrates how a village could become a vibrant tourist destination based solely on its intangible cultural heritage offerings. The rise in tourism has contributed to the rejuvenation of at-risk ICH attributes – as more tourists visit the village, there is a greater awareness and demand for the songs which the artists sing as they unfurl their painted scrolls. Additionally, as a heritage education activity, artists also showcase the process of making natural colors.

The success of this community has encouraged other storytelling communities in West Bengal to pursue and revive their tradition; they are now covered under the Rural Craft and Cultural Hub initiative of the West Bengal Government. All in all, cultural tourism and the rejuvenation of ICH have a ripple effect.