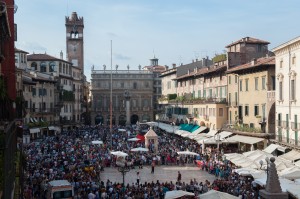 The 13th edition of Tocatì, International Festival of Street Games (17th, 18th, 19th and 20th of September 2015), organized by Associazione Giochi Antichi in cooperation with the Municipality of Verona, will welcome as Guest of Honour Catalunya, an ancient Territory on the Mediterranean Sea, rich in traditions and fascination. The streets and squares of Verona – on this occasion free from cars – will be full with games, rituals, music and dance.
Tocatì is a unique opportunity to discover the richness of the traditional Catalan Intangible Heritage, that will be compared to the Italian one, in order to create cross-cultural bridges and to offer everyone the opportunity to discover how traditions remain and renovate in social life (indeed games, as well as rituals, dance, singing and handcrafted knowledge are categories of activities that UNESCO recognizes as part of the Intangible Cultural Heritage, as specified in the Paris Convention of 2003).
About 40 traditional Catalan and Italian games will be wisely positioned side by side in order to make comparisons and reflections easier for the audience, that is also invited by players, who are ready to show the ancient playful gestures and to tell the history and habits of their Territory, part of the games. 120 Catalan members of Colla Castellera Xiquets from Alcover will erect in Verona the Castell, the well-known human tower up to 10-15 m. high, that since 2010 have been recognized as part of the Intangible Cultural Heritage. The comparison will be exciting with P’zz’cantò from Irsina (Matera, Italy). This community will bring to Verona the traditional rotating human tower that will march, passing at the sound of an ancient singing. There will be fascinating skittle games, such as the Bitlles pallareses from Pallarse Sobirà (Hautes-Pyrénées) and the Italian game Carrara, presented by the players from Pellegrino-Monforte San Giorgio (Messina, Sicily). Three very peculiar ball games will participate in Tocatì 2015: the Pilota al carrer that will be compared to To’ Vegna from Farra di Mel (Belluno, Italy) and Palla elastica of Vallico Sotto (Lucca, Italy). Two games will be exclusively feminine: Curses de dolls and Corsa con la cannata, respectively from Cadaqués and Arpino in Ciociaria. The evocative Cursa de cresols will take place in the evening, a thrilling challenge between experts that can run with an oil lamp tied to the belt, usually repeated on the occasion of the procession on 24th August in Prat de Comte (Tarragona). And more: board games, such as Backgammon, Carrom, Draughts and Chess and urban games i.e. Kendama, Frisbee and Parkour.
As usual, also Catalan and Italian traditional music and dance will be presented during Tocatì. Some music ensemble able to combine tradition and modernity will follow one another on the stage in Piazza dei Signori, transformed in Catalunya Square, in a milieu that will refer to the sculptures of Parc Guell in Barcelona, designed by Antoni Gaudì. On the stage positioned in Lungadige San Giorgio will exhibit Italian groups like Sardinian Tenores (UNESCO Intangible Cultural Heritage since 2008) and the enthralling rhythms of Pizzica and Taranta.

The inaugural parade, as usual from Piazza Erbe to Piazza Sant’Anastasia, will take place on the 18th of September and an exhibition about the playful Catalan tradition (cured by Direcció General de Cultura Popular) will be opened in the former Church San Giorgetto e San Pietro Martire. The Biblioteca Civica (public library) will host the exhibition Around the World in 70 Maps – Three Centuries of Carthographic Treasures from Children’s Literature, realized by the International Youth Library of Munich and organized in collaboration with Goethe Zentrum of Verona. It will be inaugurated on 8th September and will remain open till the 12th October, offering a cause for reflection and activities also suitable for schools.
A new theatre production by Bam!Bam! Teatro and Associazione Giochi Antichi will debut at Festival. It will be dedicated to the famous novel Sac de billes (A Bag of Marbles), which tells the autobiographical story of two Parisian kids on the run across France from Nazi persecution. Also the author, Joseph Joffo, will hold a conference and other representatives of the world of culture will contribute to the reflection about playful themes, with conventions and meetings that begin some days before the Festival. Among the other speakers, we can anticipate Andrea Vitali, writer, and Giuliano Scabia, playwright and author.
Italian, Catalan and foreign players, university lecturers, expert in history of traditions and traditional game, and writers, who have written about game, will follow one another in the International Forum of Games Culture (Cortile Mercato Vecchio). The Forum offers several opportunities of analysis: the exhibition and sale of books about playful themes, the presence of game associations, European centres of playful culture and ethnographical Italian museums that own collections about games (thanks to the cooperation with SIMBDEA – Italian Society for Museums and Demo-Ethno-Anthropological Assets).
Some “Game workshops” will take place for children, they will be organized by associations and institutions that are interested in games (game rooms, ludobus, entertainers, museum didactics experts, etc).
Finally, in the Festival’s Kitchen area, on Lungadige San Giorgio, wine and specialties of Verona will be available, while at The Game’s Tavern the customers will be able to taste wine from the territory and local specialties thanks to cooperation with local producers. 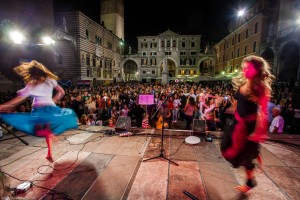 WE REMIND THAT:
– The games will be practiced six hours every day as a show for the audience. The players, ready to pass on their knowledge, will welcome anyone who wishes to participate and learn the ancient playful gesture.
– There will be also a lot of convivial moments, such as street concerts and cocktails in taverns.
– A special river transport will be established for the Festival, it will allow to visit Verona on the River Adige.
INFORMATIONS ABOUT THE FESTIVAL
– Since the first edition in 2003, the Festival was immediately successful. Since 2006, it is dedicated every year to a different Guest of Honour, represented by traditional games, music, dance and culinary specialties (2006 Spain, 2007 Croatia, 2008 Scotland, 2009 Greece, 2010 Switzerland, 2011 several countries on the occasion of the world game experts convention ITSGA – International Traditional Sports and Games Association, 2012 all the former Guests of Honour were invited in order to celebrate the 10th Festival, 2013 Hungary, 2014 Mexico).
– The Festival cares about sustainability and environment, the energy used during the Festival comes entirely from certified and guaranteed renewable sources.
NUMBERS OF TOCATì 2014
300.000 people during the three days, 500 voluntary workers, 326 Italian and foreigner players, 50 Italian and foreign musicians and dancers, 74 lecturers.
ORGANIZERS
Tocatì is organized by Associazione Giochi Antichi (AGA), in cooperation with Municipality of Verona and Regione Veneto. The European Traditional Sports and Game Association (AEJeST) is partner of the Festival, which has the patronage of MIBAC, Unicef, Touring Club Italiano and Verona University.
Among the sponsors: Banco Popolare.
The presence of Catalunya is organized by: Direcció General de Cultura Popular, Associacionisme i Acció Culturals, in collaboration with the Catalan Agency for tourism.
Associazione Giochi Antichi studies and supports traditional game, considered an Intangible Asset that must be preserved (recognized as Intangible Cultural Heritage by UNESCO in 2003).

INFO
Website: www.tocati.it
In the event of rain the Festival takes place indoor.
Ticket: Tocatì is for free.
Disabled: A special attention is reserved to handicapped people in order to guarantee admission to some of the games.