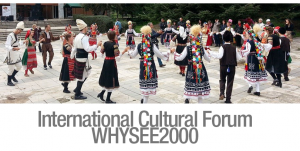 The International Cultural Forum WHYSEE2000 promoted by AIG (Italian Association Hotels for Youth) and by the Italy-Bulgaria Committee in collaboration with UNPLI (Italian network of Pro Loco associations), ANCI (National association of the Italian Municipalities), NAMRB (National Association of Municipalities Republic of Bulgaria), CLUJ2015 (European Capital of Youth 2015), with italian and foreign partners, will take place from the 17th to the 20th September in Italy in Apulia and Basilicata. With the partnership of the ICH NGO FORUM.

Carrying on the work started during the month of october 2011 and organizing several activities, projects and events until the present day, the organizers planned the 2015 edition of the International Cultural Forum WHYSEE2000 considering:
– the importance of working to safeguard the intangible cultural heritage creating new working opportunities in tourism through the discovery of Ancient professions to realize handcrafted products and foods;
– the election of Matera (Italy) and Plovdiv (Bulgaria) as European capital of Culture 2019;
– the development of UNESCO’s initiatives, the decision to regress and sign another official document with the proposal of the participants addressed to UNESCO and to the Culture Ministers of the engaged countries (the first dates back to the forum of 2012 http://www.whysee2000.community/2012/documento%20ue.htm);
– it is always important to talk about peace, and in this case we want to do it through sports which has always proven how much we can stay and do together without any cultural, religious barriers and without divisions or discrimination of any kind;
– the 70th anniversary of the Italian Association Hotels for Youth (AIG), created to promote socialization and the development of a hospitality net aware of the importance of anyone’s cultural heritage;
– the “Antica Masseria dell’Alta Murgia” confiscated to a criminal organization where it’s in development phase the F.O.R.T.E. Social project for the well-being and promotion of the local food and culture through young people.

The Cultural Forum WHYSEE2000 and its associated events

UNPLI-ANCI Conference about the importance of the intangible cultural heritage: organized by UNPLI and ANCI (Bari, Friday 18th September 2015) with the presence of all delegates and the responsabile of SIMBDEA, another italian NGO accredited to the UNESCO’s Intergovernmental Committee for the Safeguarding of the Intagible Cultural Heritage.

World Games for Peace -AIG 70th anniversary:
Will take place in different cities and locations: Amateur Sports Association and Private People, will also participate as well as the International committee of the World games for Peace.

General States of Culture and Tourism:
Event developed by the National Youth Forum.

During the course of the Forum , other events will take place such as:
Conferences, round-table, seminars, workshops and thematic debates.

Exhibition Area: For Handcraft, local wine and food and for the foreign and Italian folkloristic groups.

Artistic Exhibitions:
Event developed by GAIA Australia (paintings and sculptures in the pedestrian area of the interested Cities).

Events:
Realization of concerts in gardens and in peripheral squares, to make the less crowded areas, alive and to make young people from vulnerable areas, the main and active figures of these shows.

ICH -FEST AWARD:
Competition among folkloristic groups with sessions and and daily award ceremonies to allow the participants to come back at the end of the session.

Tasting and catering:
With the participation of local “masters of the taste” for the well-being of the local reality, in a global system ,such as the Italian cultural heritage, such themes will be also discussed at the EXPOMILANO2015.

Emotional Package of the Senses and Passions:
For everyone who will participate, after the tastings it will be possible to discover ancient jobs and live the territory through laboratory activities (cooking, handcraft, papier-mache, ceramics and guided tours in the countryside where the visitors will be engaged in the grape harvest process and so on).

To participate: select the event and fill in your data in the registration form on line. After this step you will receive the bank data in order to complete the payment operations of the participation fee.