Members of the ENS – the NGO of the Catalan Cultural Association Network – include the 27 most important federations working in the field of Catalan culture.

Cultural associations are widely present in Catalan society and have a very particular and unique organisational model. They are the concrete response of civil society to the needs for training and education, self-help, community work and social cohesion while developing Catalan popular and traditional culture in a sustainable way, both from a historical and future perspective.

There are around 3,700 NGOs under the umbrella of the ENS with a direct and real participation of 178,500 people involved in the different aspects of safeguarding intangible cultural heritage.

Domain(s): All our NGOs are presentthroughout Catalonia in a diversity of forms and organisations, including: folk and popular culture associations; performing arts; oral traditions and expressions; centres of debate and study by culture, anthropology, ethnologic and nature and the universe; social practices and social reintegration centres; reflection and cultural action; recreational centres; Unesco schools; foundations; choirs; craftsmanship; amateur theatre companies and music bands; 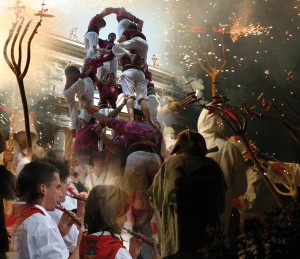