Aims: Safeguard and promotion of the traditions, both musically and as a handicraft, connected with the zampogna (the bagpipe of the Centre and Southern Italy).

The “Circolo della Zampogna” was born from the will of a consistent part of the local community “to do something” to safeguard, to promote and to transfer to the new generations the typical cultural heritage represented by the zampogna. Since its foundation joined the Association several zampogna makers and players that, both as group and individuals, are those who traditionally create, maintain and transmit this kind of heritage. 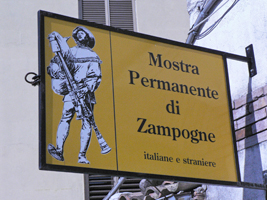 The main safeguarding actions can be summarized in the following:

a)Institution of a Permanent Exposition of Italian and Foreign Bagpipes and of a documentation center called “Italian Center of the Bagpipe”;
b) Revitalization of the preceding zampogna Market through the integration with a musical Festival (the International Bagpipes Festival) in which traditional music and new compositions and sounds could meet offering to the young people the opportunity to appreciate the vitality and the potentiality of a so ancient and topical instrument;
c) Organization of training courses for playing and making the zampogna and to train groups of young people to safeguarding activities;
d) Participation to several meetings, festivals and other initiatives at home and abroad;
c) Educational, awareness-raising and information activity aimed at the schools of the area;
d)Publishing of the magazine “Utriculus” (from the Latin name of the bagpipe), CD, DVD, videos and books;
e) Organization of meetings and other events in cooperation with the Molise University, the Ministry of Culture, the “Abruzzo, Lazio and Molise National Park” and other public institutions;
f) Promotion (and support to) studies and degree thesis concerning the zampogna and its traditional and present context;
g) Creation of a network of exchanges and links with Italian and foreign similar associations, cultural and musical institutions, museums, scholars, experts and enthusiastic people;
h) Participation to the establishment of the ICHNet (Intangible Cultural Heritage Network). 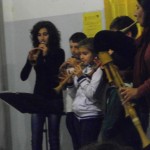 Especially relevant in safeguarding the zampogna cultural heritage has been the experience of the project “Living with the Bagpipe” devised and realized by the Circolo in the ambit of the European Program “LEADER II”. Besides all the other good results in terms of preservation, promotion and revitalization, the project let the Circolo to take the first census of the cultural heritage connected with the zampogna, to collect materials and documents for the “Italian Center of the Bagpipe” (CIZ), to realize a transnational cooperation project called “Common Sounds to the European Rural World” in cooperation with the Local Action Group “North Pennines” (Northumber1ad, UK) and above all to reinforce the link between the community and its heritage.
Moreover, every year, on the occasion of the Assembly of the members, the Circolo organizes also two “Bagpipers Meetings”, in Spring an in Autumn, in which the participants analyze what has been done and propose what could better to do in terms of safeguard, research, transmission and promoting of the zampogna tradition.