The 1st International Conference of accredited NGOs reinforced dialogue with the UNESCO bodies gathered in Santa Susanna (Maresme, Catalonia), NGOs accredited by UNESCO for the Safeguarding of the Intangible Cultural Heritage (ICH) have established links and shared experiences.

When a convention is created (the Safeguarding for ICH in this case, from the 17th of October 2003), States that ratify it, do accept their obligations and obtain participation in the General Assembly. In the case of the Convention for the Safeguarding of ICH, it involves 161 States that delegate the practical tasks of implementation of the Convention to the Intergovernmental Committee, which meets annually. UNESCO’s accreditation of some NGOs working in the field of cultural heritage allows them to advise their bodies (the General Assembly and the Intergovernmental Committee). This is the frame in which the Conference in Santa Susanna is developed. These NGOs accredited by UNESCO have a representative and coordinating body: the International Forum of NGOs based in Paris.

From 6 to 12 of June, the 1st International Conference of NGOs accredited by UNESCO has enabled these organizations to share experiences. The working session have defined the mission of the International Forum of NGOs and its relations with UNESCO. They have agreed in the creation of a Directive Committee that coordinates the Forum’s activities. All the representatives of these NGOs have positively valued the following of these steps, keeping in mind that the meeting of the Intergovernmental Committee in Namibia will be held from November 30th  to December 4th, 2015.

Organized by the ENS de l’Associacionisme Cultural Català and with the support and co-operation of the International Forum of NGOs, this meeting has also received the knowledge and experiences of NGOs and experts that, despite not being accredited by UNESCO, do develop their work in the field of Intangible Cultural Heritage. During the first working session, the entities have been divided in two groups: accredited NGOs on one side and non-accredited NGOs and experts on the other side, but many debates and plenary discussions have taken place within the Conference, where the participants have expressed common concerns: the relationship of NGOs with UNESCO and the States these organizations belong to; the change of attitude that the consideration of cultural expressions as intangible cultural heritage involves, etc.  It is remarkable the great amount of Catalan entities and associations (sardanistes, castellers, puntaires, musical societies, amateur theater, giants) who participated in these meetings. 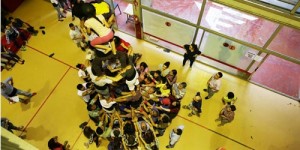 The 1st International Conference of NGOs accredited has been an opportunity to redefine the relations with UNESCO and has allowed to bring closer different expressions of catalan popular culture to the participants, as the debates and working sessions have been combined with cultural visits to to La Patum in Berga (registered in the Representative List of the Intangible Cultural Heritage of Humanity), the performance of an Aplec de Sardana, a rehearsal of Castellers de Barcelona (also registered on the same list), concerts, visits of various puntaires (lace makers), or the performance of Falcons, among others.

(Many thanks to Àlvar Andrés Elias for these picures)