In Campania, in South Italy, we find a series of traditional musical instruments with a strong identity value: among these is the Campania drum, called tammorra. In fact, if it is true that the tambourine is widespread throughout Italy, as indeed with certain peculiarities it is throughout the world, the tammorra is peculiar to a limited geographical area. It goes from the province to the north of Salerno, passing through the whole province of Naples, up to the Lower Casertano, that is the area south of Caserta bordering Naples.
It is a very ancient musical instrument. In fact, at the National Archaeological Museum of Naples, there is a mosaic of Dioskourides made sometime between 199 and 80 BCE, coming from the Villa of Marcus Tullius Cicero in Pompeii, that shows a group of itinerant musicians with a tammorra.

A similar argument applies to the traditional instruments used in the Music of Sant’Antuono, commonly called pastellessa, performed by beating farming instruments, such as barrels, vats and scythes. The area of interest has Macerata Campania as its epicentre, a small town in the province of Caserta, but manages to actively involve all the communities that surround it (Capuano, 2018).
The Music of Sant’Antuono is part of a rite that originated at Macerata Campania and dates back to pre-Christian times, when the town was a district of ancient Capua [1]. It is proposed every year with the same passion and the same zeal, involving the entire population, from the youngest to the elderly, on the Feast of Sant’Antuono (i.e., St. Anthony the Abbot). 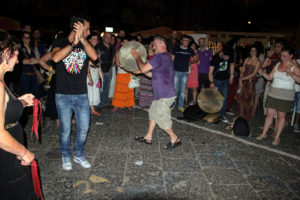 A typical execution of the Tammurriata Marcianisana (Ferdinando Kaiser, Napoli 13-07-2013)

The communities close to the city of Caserta where it is possible to find tammorra players are those of the Marcianise district, which includes in addition to Marcianise also San Marco Evangelista, San Nicola la Strada, Maddaloni, Macerata Campania and Portico di Caserta, so much to define one style of execution called Marcianisana tammurriata. The Marcianisana is associated with a dance called in Neapolitan ‘o ballo ‘e l’urzo (lit. “the bear dance”), in which the performers intertwine in unusual movements on the sound of the drum, accompanied by pops of castanets and local songs performed in ancient times during farm work (Cuccaro, 2016). What makes the playing techniques of the Marcianisana and of the Music of Sant’Antuono interesting, if not unique, is that they have preserved the traditional evolution of the performances intact, without external influences.

Until forty years ago, the practice of tammorra, as well as dancing and singing, was almost the exclusive prerogative of the women of the community. However, among the last generations the practice has been handed down in families linked to this traditional language more and more often to men, so much so that in the last twenty years it is not uncommon for the most representative players of a particular city or neighborhood to be male. A striking example of this was the figure of Giovanni Monte [2], considered in life the main custodian of the Marcianisana and indirectly of the whole area characterized by this particular tradition.

At the end of the twentieth century, in the Marcianise district, the process of transmitting the art of the tammorra to new generations suffered a significant decline, fueled by the economic crisis and the consequent emigration process. On this occasion, individual initiatives gradually brought the tradition of tammorra to new life. Giovanni Monte, for example, starting from those years tried to extend the transmission process outside the family context, bringing many young people closer to tradition. For the first time, the tammorra was not only transmitted by family, but to students eager to learn the technique of the instrument and the rules of traditional dance. The non-formal learning process has led in a few years to an increase in the number of performers, also leading to the birth of the Associazione Radici operating in the territory in the safeguarding of intangible cultural heritage in line with the 2003 UNESCO Convention. An example is the Project “Forasona”, launched in 2012 by the Associazione Radici, which contributed to safeguard and transmit the element. Moreover, collaboration with the UNESCO-accredited NGO Associazione Sant’Antuono & le Battuglie di Pastellessa is provided for the implementation of safeguard policies. 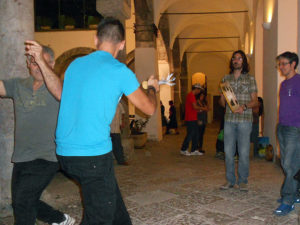 Currently the safeguard process in the Marcianise district involves three generations of tammorra players: the elderly almost exclusively female, the adults mainly males and the young equally divided between males and females.
The organization of spontaneous gatherings of tammorra players from all over Campania has, over time, given curious or simple visitors the opportunity to approach the use of the tammorra. In fact, in these events free internships are organized to transmit the use of the traditional musical instrument, in which everyone can participate and learn the basics. Normally, during the year two distinct moments are organized in Marcianise: one on the Carnival and the other on 24 June on the night dedicated to St. John the Baptist. The Carnival celebrations are very suggestive, characterized by the Lamentation over the Dead Carnival. On the occasion, according to a widespread tradition, in some houses open to the public a puppet that symbolizes the Carnival is set up—which in Campania takes the name of Vincenzo—and lying on a bed. Visitors to the rhythm of tammorra perform lamentations, singing traditional stanzas full of vocal impetuosity (santantuono, 2015). Usually, the puppet on Shrove Tuesday—at the end of the carnival period—is set on fire on a bonfire lit for the occasion, around which dances and songs are performed.

The use, then, of VoIP technology (e.g., Skype) has made it possible over time to provide remote support in the use of the tammorra, with students also from abroad, including the most recent from Sweden and China.
What stands out in Macerata Campania has something truly special. For several centuries the local community has carried out in a natural way, without written rules, the safeguarding of the Music of Sant’Antuono: its cultural strength, religious and fighting against evil; its social importance and its bonding between many different communities—without distinction of sex, race, language, religion, political opinion, personal and social conditions—made it universal (Ferraiuolo, 2017). Usually the performers starting from 4 to 5 years of age, some even 2 years old, begin their experience in the use of traditional musical instruments—while the older performers are over 80 years old—they grow up with the Music of Sant’Antuono. Therefore, every citizen of Macerata Campania has a certain sensitivity to intangible cultural heritage safeguarding. Habitually you start with playing the scythe (i.e., a curved, steel blade between sixty and ninety centimeters), and then move on to other instruments that require greater physical prowess, but the choice of the musical instrument is free and each performer chooses the musical instrument that best represents him between the barrel, the vat and the scythe. 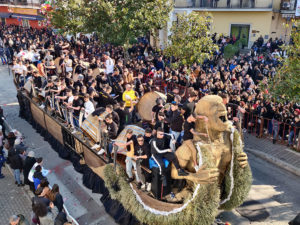 The UNESCO-accredited NGO Associazione Sant’Antuono & le Battuglie di Pastellessa has a primary and fundamental role for the local community in the ICH safeguarding and development. It was born inside the Parish of San Martino Bishop of Macerata Campania (Roman Catholic Archdiocese of Capua) as the union of the ancient Committee of St. Anthony the Abbot and the traditional local groups, called battuglie di pastellessa. It brings together all the local performers, called bottari [3] (around 1,500, i.e., 15 percent of the population), like an umbrella and implements the safeguard policies with them.
The surprising thing is that in Macerata Campania, the vast majority of performers have never undertaken specific studies in the musical field in their life. In this case, the transmission of knowledge takes place orally, following a process that has lasted for centuries and that has arrived today unaltered, passing from generation to generation in a completely natural way. A tradition, therefore, that is renewed cyclically involving all the people, starting with the little ones who, from an early age, delight in practicing percussion. During the Feast of Sant’Antuono—on 17 January—it is easy to witness scenes in which children, with a very careful approach, observe older people playing and then try to imitate them by making simple gestures with their hands. To these scenes, over the course of the year, we can add others in which it is easy to see the children playing by creating percussion by clapping their hands on the school desks, accompanied if necessary with verses performed by mouth, as if to emulate barrels, vats and scythes, or humming traditional songs.

In Macerata Campania in the months leading up to the Feast of Sant’Antuono, every November and December, practical courses (i.e., rehearsals) are organized to teach to the younger generations how to play traditional instruments—barrels, vats and scythes—with older people in the role of masters. On this occasion, usually are involved twenty traditional local groups. These repeated rehearsals in addition to allowing the participants to learn to play traditional instruments, allows them to acquire a certain physical resistance that will help them during the feast to resist playing for several hours in a row (even ten hours in a day).
Since 2015 with the local school of Macerata Campania, the Associazione Sant’Antuono & le Battuglie di Pastellessa has started the project Knowledge, Arts and Traditions at the Chair on the themes of the 2003 UNESCO Convention. Over the years, the project has involved more than 600 students aged 7 to 13 years in learning the art of tammorra and the Music of Sant’Antuono. The project allowed the local school to join the UNESCO Associated Schools Network.

The use of modern methods of transmitting information has made it possible to share ideas, create shared safeguard policies, and learn knowledge from other communities. In this frame, the media (i.e., TV, radio, internet) have allowed to create interest over time, but above all to enhance the individual intangible cultural heritage performers and make them understand that they are an active part of the intangible cultural heritage, thus stimulating also those people with less interest. This has stimulated many communities, even more than a hundred kilometers away from Macerata Campania, in learning the Music of Sant’Antuono, even if it was not an element of their intangible cultural heritage. Social networks played an important role in all of this, where it was possible to share for free short informative videos made by the community in the spirit of the 2003 UNESCO Convention. An example is the video of a live performance of the local group La piccola compagnia de I punto esclamativo who got over one million views on YouTube in just over a year, with visitors from all over the world (santantuono, 2018). Or the single “Lùce argiénto” dedicated to the Our Lady and Pope Francis’s encyclical Laudato Si’ made by the local group Pastellesse Sound Group during the toughest phase of COVID-19 (Pastellesse Sound Group, 2020), enough to earn the attention of the Vatican newspaper L’Osservatore Romano (Ferraiuolo, 2020).

Notes
[1] Capua, probably founded around 800 BCE (before Rome), in the fourth century BCE was the largest city in Italy after Rome.
[2] Giovanni Monte, a well-known craftsman of traditional musical instruments, was born in 1963 and died in 2016 in Marcianise. He was president and founder of the Associazione Radici with headquarters in Marcianise.
[3] The bottari are typical performers of Macerata Campania that beating (from here bottari, i.e., barrel-beaters or barrel-players) farming instruments, such as barrels, vats, and scythes, in the performance of the Music of Sant’Antuono.