Latin America and the Caribbean July 3, 2013 posted by ichngoforum
Share

Since 1991, the Erigaie Foundation has opened several lines of work that involve what is now defined as Intangible Heritage. These lines of work are based on a main strategy: regard research as a tool for development, for dialogue and transfer of knowledge, and as an instrument to mediate between the official, academic and community spheres. Three of Erigaie’s lines of work outstand as directly involved with cultural practices and identities, and the research projects carried out within these lines look forward to their identification, documentation, analysis, protection and enhancement and as a means to strengthen the communities and their confrontation with the problems from the national and international political and economical policies introduced by globalisation.

1. Culture, environment and community development: This line of work established in 1991, focuses on traditional communities that consider human beings as part of nature, through cultural signifiers that remind them of their obligations with the environment. However, recent colonization, forced migration, reduction of natural areas, weakening cultural traditions and the introduction of capitalist consumption have impacted these communities, their practices and local resources. Erigaie has pursued the recovery of native knowledge in favor of environment management, by means of an interdisciplinary and action-participation perspective that has promoted the development of natural resources for the benefit of the communities. This has been done in collaboration with Colombian NGOs Tropenbos and Gaia.

2. Museums, tourism and general public: Erigaie considers tourism and museums as a means to enhance those manifestations that communities consider representative of their identities and practices. Erigaie is interested in analyzing how these cultural spaces may generate confronting narratives, and pursues solutions to conflicts related with whom and how their representation are assumed by locals, foreigners, experts or official employees and from diverse political, religious or economic perspectives. Particularly, it looks forward to promote local initiatives of museum and tourism projects that may benefit the communities involved. Since 2005, the Foundation in association with Terra Firme (another national NGO), and the Ministry of Culture have supported the creation of several museums and tourist routes.

3. MIA (Tangible, Intangible and Archaeological) Cultural Heritage Observatory: Created after the 2003 Convention of ICH, with the purpose of monitoring its implementation in Colombia and analyzing its impact on the discourse of tangible heritage. It encompasses two areas: critical analysis of public policies and official ICH action plans; and establishment of methodologies and communication channels that permit an active participation and interaction between official entities, academic institutions and communities. One of the main tools developed are the focal working groups composed by representative members of these three spheres. Here, each member must recommend and/or propose solutions for specific topics and further action with ICH, such as a conceptual framework and working methodologies for the inventory and elaboration of safeguarding plans, alternatives for communities in the matter of intellectual property and collective rights, and the impact of cultural tourism in the weakening of cultural identities and practices.

Domain(s): (a) oral traditions and expressions, including language as a vehicle of the intangible cultural heritage; (b) performing arts;(c) social practices, rituals and festive events;(d) knowledge and practices concerning nature and the universe;(e) traditional craftsmanship.

Since 1991 Erigaie has proposed several projects in this line of work in the Amazonian basin and since 2008 new ones have been proposed for other areas of the country. These new research projects have been directed to the Andean region, specifically the Huila area, deeply affected by political struggle and illegal drug trafficking, which have altered traditional knowledge, mainly in peasant communities. An ongoing project funded by Colciencias and in association with the Ministry of Culture, Los Andes University and the local communities, pursues the study of these peasant communities and their traditional knowledge of plants (medical, nutritional and symbolic uses) in domestic environments, as a means to promote the revitalization of their cultural practices and a better quality of life. This same framework has been applied in Bogotá, in association with the Instituto Distrital de Patrimonio Cultural, and at present the acquired knowledge has been enhanced by public lectures and pedagogical tours with local inhabitants.

Since 2004, an inventory process of the manifestations of the central Andean area of Huila, intensely affected by political violence, has resulted in the awareness of the diverse practices regarding traditional foodways and agricultural knowledge, oral traditions, rituals and festivities, as well as their enhancement by different means, such as web pages, pedagogical routes and communitarian tourism programs. Since 2005, with the aid of Erigaie and the support of the local government, a museum of funerary ritual practices was created at a central Andean town where corpses are naturally mummified. The community actively participates in exploring the meanings of death, remembrance and permanence of loved ones and with their narratives, donations and communitarian management of the museum enhance their local identity through this singular experience. Since 2006, in the Colombian Caribbean coast single mothers and fishermen created two local NGOs with the aid of Erigaie and the Ministry of Culture, in order to preserve the traditional knowledge of their maritime culture. Through the rescue and inventory of different objects associated with their ancient and present cultural practices, in a collaborative research program, these members and the researchers from Erigaie have recorded from the local inhabitants the oral histories related to their cultural practices and have materialized their results in an open space maritime culture museum, with the support of Colombia’s National Museum. Also in association with the Ministry of Culture, the Erigaie Foundation developed the research and curatorial exhibition of Colombia’s representative cultural manifestations presented in 2011 at the Folklife Festival organized by the Smithsonian Institution in Wash. D.C. For this presentation, the Colombian government relied on the conceptual framework proposed by the Foundation, The Nature of Colombian Culture: Eco-systems and Intangible Cultural Heritage Routes, based on the importance of the relation of traditional cultural practices and the preservation of the environment. Colombia’s participation included the traditional foodways, games, handcraft production of objects and musical instruments, body performance (in dance, music, tattooing, customs), and ecological management of the environment of five specific Colombian eco-systems.

Since 2006, Erigaie and the Colombian Institute of Anthropology are conducting a research project on the analysis of the elaboration of Palenque de San Basilio’s (included in UNESCO´s Intangible Heritage list) and of the Nukak Maku’s (included in the ICH national list) Safeguarding Plans. Palenque de San Basilio’s is an Afro-descendant community of little or no recognition in the local and national context, and the identification of a human group known as Nukak Maku, refers to a number of nomadic indigenous groups whose language and forms of settlement are unknown for large part of the country’s population. These circumstances constitute very interesting case studies, as they have delayed the process of elaborating safeguarding plans, due to the different problems that surround them, from political struggles for recognition of Palenque as a black independent community, or the rapid loss of the Nukak cultural practices and identity. As a result, the analyses of cases such as these are oriented to the formulation of recommendations for the Ministry of Culture in the further implementation of their safeguarding plans. The Erigaie Foundation projects constitute a diverse example of the problems and methodological challenges that the Colombian government and the communities have to confront in the development of ICH policies and actions. The monitoring of these processes by the researchers of Erigaie pursues an adequate adaptation of the Convention and its legal principles to the country’s numerous and diverse manifestations and the communities that practice them. 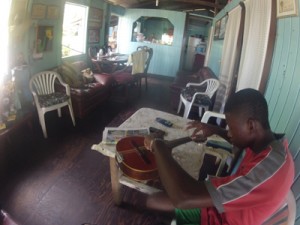