Call for proposals: Law as heritage 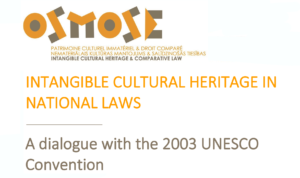 Bordeaux, December 1–2, 2022
Symposium organized in the context of the Osmose research program on law and ICH, with the support of the French ministry of Culture (Délégation à l’inspection, la recherche et l’innovation) and the patronage of the French Commission for UNESCO.
Research partners:
• Institut des Sciences sociales du politique (ISP, UMR7220,ENS–Paris–Saclay, Université Paris Nanterre)
• Institutde recherche Montesquieu (IRM–eA7434), Université de Bordeaux
• Académie de la culture, Riga, Latvia
Conceptual note
The relationship between law and heritage may not be reduced to the tools by which the first (Law) protects the latter (heritage). Indeed, on the one hand, heritage law represents a research field well established in France, and on the other hand, a non–negligible number of works are dedicated to legal heritage. In a very schematic manner, we can distinguish three types of contemporary research that may be considered as apprehending law as heritage:

This symposium has been designed against this rich intellectual context. Its originality resides in the fact that it does not intend to be a summing–up exercise on “legal heritage”, who would pretend by the mediation of the concept of heritage of giving unity and coherence to works that are today scattered. The goal is different: more than legal heritage, the symposium means to tackle the process of the heritagization of law, which is to say, precisely how the heritage category and the tools to protect heritage are used in relationship with the law and legal objects.

Submission process
This call for proposals seeks to prepare a symposium that will take place on December 1–2, 2022, at the University of Bordeaux(France). It is addressed to researchers of all statuses and disciplines. Since the organizers wish to renew approaches, this call is open to young researchers–that should not hesitate to answer this call. Proposals (title and abstracts limited to 3000 characters with spaces) should be sent to all the organizers before April 30, 2022.