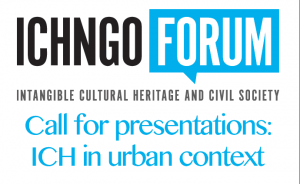 Call for presentations ICH-NGO Forum in Bogota, 8 December 2019, in advance of the Intergovernmental Committee Meeting in Colombia.

During the ICH-NGO Forum meeting there will be a session on Sunday morning, especially dedicated to the topic of ‘ICH in urban context. Cultural diversity and social cohesion’. This session is prepared in cooperation with the National Heritage Board of Singapore. It is a timely topic. Over half of the population of the world is now living in urban areas – cities with millions of inhabitants and diverse communities. Cities such as Bangkok, Singapore, Bogota and Rotterdam are facing multiple social and cultural challenges, not the least, due to processes of migration, the challenge of superdiversity and social cohesion. Thinkers about superdiversity see evidence of emerging cosmopolitan cultural practices that build on social practices brought along by migrant groups. These cultural practices are often reflected in public festivals and festivities. Festivals like Diwali are not just celebrated in India, but have become a permanent feature of Little India precincts all over the world. Similarly, other traditions such as Carnival or the Chinese Dragon Boat Festival are celebrated in major cities across the world.
Cities can be defined as contact zones where the global meets the local. In the text of the 2003 convention it is said that ‘processes of globalization and social transformation, alongside the conditions they create for renewed dialogue among communities, also give rise, as does the phenomenon of intolerance, to grave threats of deterioration, disappearance and destruction of the intangible cultural heritage’.

During the session there will be six (or more? but then in parallel sessions) short presentations, up to 10 minutes each, from cases from all over the world. Already scheduled are presentations from Singapore and Bogota. The moderators of this session are still looking for presentations from other regions, such as Asia, Africa and Eastern-Europe. NGOs attending the Intergovernmental Committee meeting in Bogota, and wanting to do a presentation, are invited to present an abstract (with a maximum of 200 words) before 1 November to Albert van der Zeijden, a.vanderzeijden@immaterieelerfgoed.nl.
The session ICH in urban context: Cultural diversity and social cohesion will take place on Sunday, 8 December 2019, and is prepared in partnership with the National Heritage Board of Singapore. The session is moderated by Albert van der Zeijden (ICH-NGO Forum, Dutch Centre for Intangible Cultural Heritage) and Kirk Siang (National Heritage Board, Singapore).