Asia and the Pacific June 25, 2018 posted by ichngo
Share 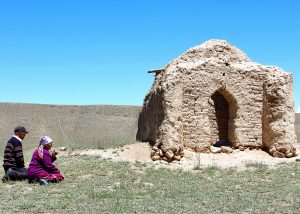 Worshipping at the Site of Sacred Father Sadykan-Ata

Aigine Cultural Research Center (Aigine CRC) works in the field of traditional knowledge, education, humanities and social research. Founded in 2004, the Center set a goal of studying and preserving natural and cultural heritage and diversity in Kyrgyzstan. Having started with primarily academic projects such as study and documentation of the ancient tradition of pilgrimage to sacred sites, the Center adopted Participatory Action Research approach as the main working principle of the Center. The majority of Aigine’s projects are aimed at safeguarding biocultural heritage with focus on three domains a) sacred sites including its natural, spiritual, social components and dimensions, b) the great heroic epic “Manas.Semetey.Seitek” as well as small Kyrgyz epics, c) the folk music. All elements of biocultural heritage that Aigine aims to preserve comprise in themselves intangible cultural elements.

Over the course of its work Aigine came to realize that biocultural heritage can be best preserved when it is integrated in contemporary life and when stakeholders and rigthsholders manage to build meaningful collaboration. Thus, since 2007, Aigine identified two additional objectives:
Preserving, developing and integrating traditional wisdom with contemporary life and aiming to incorporate the positive potential of traditional wisdom in decision-making at all levels of public and political life;
Seeking points of rapprochement and interconnection among esoteric knowledge and science, nature and culture, traditions and innovations, West and East, and other experiences often seen as oppositions. 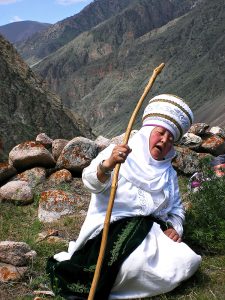 Performing a Zikr Ritual at the Sacred Site

Mapping the Sacred Geography of Kyrgyzstan
The Sacred Geography of Kyrgyzstan is a compilation covering more than 1075 sacred sites throughout the country with geographical locations, descriptions and oral histories. This is a unique mapping project that provides a comprehensive approach to understanding spiritual and cultural heritage of Kyrgyz people, first of all, to Kyrgyz people themselves and then to other people interested in local culture and traditions. Aigine CRC spent ten years thoroughly researching sacred sites and traditional knowledge in all parts of Kyrgyzstan in order to provide comprehensive understanding of its Sacred Geography. The data collected during these studies has been published in ten books. Materials on Sacred Geography have been introduced into the national school curriculum. 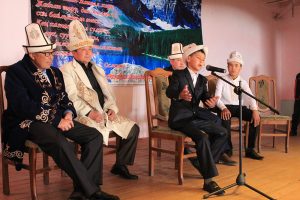 Transmission of the epic heritage

Safeguarding the Epic Heritage
Aigine CRС has supplied more than one thousand high schools and universities throughout the country with 67 hours of DVD recordings of the Kyrgyz epic trilogy “Manas, Semetei, Seitek”. This digital video compilation is the only large-scale contemporary version of the epic performances. Aigine CRC has recorded and produced that by work with 15 contemporary reciters. Now, thousands of young people throughout the country have access to live epic performance and are able to study and further safeguard cultural heritage. 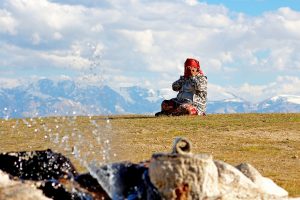 School for Novice Manaschys
Aigine’s another groundbreaking project aimed at safeguarding epic heritage was a School for Novice Manaschys conducted from 2010 to 2012. One of the main objectives of the School was to revitalize and enhance traditional mentor-apprentice system that has been lost. Over the course of the project, nine young epic reciters were recruited out of more than thirty applicants from all over Kyrgyzstan. This School gave the young manaschys a unique opportunity to meet with and learn from recognized epic chanters during few-day-long workshops three times a year. The School became a ground for sharing manaschys’ spiritual experiences and improving their recitation skills. Aigine’s projects contributed a great deal to a successful nomination of Manas. Semetei. Setek epic trilogy for the UNESCO ICH List. 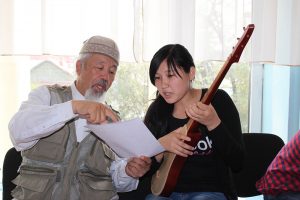 Promoting traditional musical heritage and Record-Breaking Ensemble of 1001 Komuz Players
Aigine CRC’s project on Transmitting Traditional Music started in 2009 with publication of a book on the traditional method of playing komuz based on the authorial system of Nurak Abdrakhmanov, the greatest Kyrgyz musician (1947-2014). It was followed by teaching seminars for music school teachers, in which 36 teachers were trained. In turn, they each trained a number of their own apprentices. As a result, within 3 to 5 years, under Aigine CRC’s careful guidance, the network of 36 music school teachers grew into an ensemble of 1001 komuz players. At the opening of the World Nomad Games in 2016, our record-breaking ensemble of 1001 komuz players magnificently performed the melody Mash-Botoi. The small project grew into a nationwide network of musicians of all ages from ages 8 to 74 and became an example of sustainable traditional education.